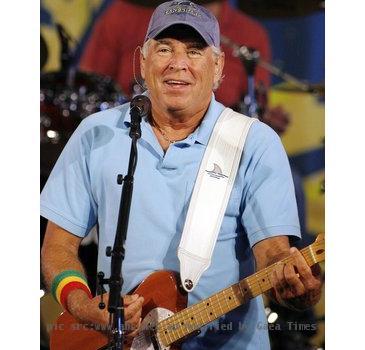 SYDNEY, AUSTRALIA (GaeaTimes.com)- Jimmy Buffet was performing in Australia after a hiatus of twenty years. With lots of expectations, he was in the best of his spirit to groove his Australian fans, but little did he know that a severe accident was awaiting his fate. The veteran 64 year old singer, fell off stage, to fall on the first row of audiences, while performing on “It’s been a lovely cruise, I’m sorry it’s ended”.

According to the sources, Jimmy Buffet fell off stage because he could not assess where the stage ended. This was mainly because he became slightly unmindful while interacting with the audiences. His tour manager, Michael Chugg immediately came on stage and asked his fans to vacate the hall. However, most of them refused to leave. An audience told to a reputed source that they were sitting in the tenth row, but still they could understand that the singer “did a massive face-plant”, as he did not get up for quite sometime. Another audience said that no one wanted to leave because everyone was anxious to know how severe the injury was. According to him, most of the concert goers were quite scared to see him fall all of a sudden.

As soon as Jimmy Buffet fell off stage, he lost his consciousness and kept lying on the floor for atleast eight minutes. However, thirty minutes later he was taken to the St. Vincent’s Hospital in Darlinghurst, where he is still undergoing treatment. His representative, Laurie Gorman said that right now the veteran singer is under a stable condition and he will be released on Thursday if everything goes smooth.

SYDNEY - England fast bowler Stuart Broad has admitted that being hit for six sixes in an over by In...

PANAJI - "West is West", starring Indian actor Om Puri, will be the opening film at the 41st edition...

Is Palin cheating to get votes for daughter in 'Dancing with the Stars'?

LOS ANGELES - For the seventh consecutive time, Sarah Palin's daughter Bristol has been voted by v...