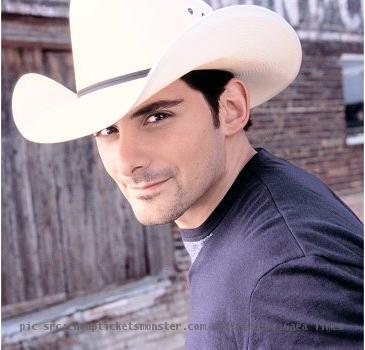 NASHVILLE (GaeaTimes.com)- Country singer/guitarist Brad Paisley received the most coveted award for the category of Entertainer of the Year last night at the CMA Awards 2010 at Nashville, Tennessee after five years of trying. Brad Paisley hosted the show consecutively for three years and this year also he entertained the audience to its fullest with his parodies, his jokes and his digs. However, the singer became emotional when his name was announced as the Entertainer of the Year.

Brad Paisley had been nominated each year since 2005 but it was his first win. He said that his hero “Little Jimmy Dickens” has a saying that if someone sees a “turtle” on a fence post and help getting up the fence and said that he feels like a “turtle” that night. He thanked his fans, his grandfather and his wife Kimberly Williams. Brad Paisley said while weeping away his tears he said that his grandmother never thought that his concert would draw 20,000 people. Brad Paisley and his co-host Carrie Underwood performed on the show and they kept the show moving with jokes of Brett Favre, Tiger Woods, Carrie Underwood’s marriage with Mike Fisher and also BP oil spill.