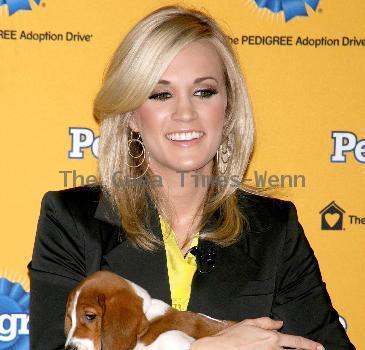 NASHVILLE (GaeaTimes.com)- The country-pop star Carrie Underwood and Brad Paisley hosted the 44th Annual Country Music Awards 2010 and the hosts managed to entertain the audience with their witty remarks, their performances and also their parodies and jokes that kept the audience riveted o their seats. Not only they made fun of other celebrities, Carrie Underwood made fun of her own husband Mike Fisher and her recent marriage with the hockey player. Carrie Underwood looked marvelous in her different attires and her glamorous costumes. The toned legged singer, however, was not seen in her usual skimpy outfits and black color prevailed in most of her dresses.

Carrie Underwood’s co-host Brad Paisley praised the singer previously and said that she is a down to earth singer who does not throw any celebrity tantrums on stage. Brad Paisley said both of them have bonded so well that they have decided that they would not go by any planned scripts and would require no off-stage prompts. Carrie Underwood sang the song “Songs Like This” and shew joined on stage by Keith Urban and Brad Paisley, who gave the background music. The singer also performed “Mama’s Song” and her mother Carole also looked on from the audience as she sang the song.

Carrie Underwood and Brad Paisley left no stones unturned while they made fun of everything that happened in recent times. Carrie Underwood flaunted her wedding ring in front of her audience and the singer seemed excited while showing off her sacred bling. The hosts made fun of recent scandals of Tiger Woods, Brett Favre, Gulf of Mexico Oil Spill and also Nashville Flood which tickled the funny bone of the audience.