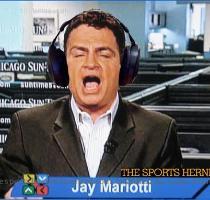 LOS ANGELES (GaeaTimes.com)- ESPN TV reporter Jay Mariotti has found himself on the wrong side of the law after an altercation with his wife on Saturday. The Los Angeles Police arrested the popular TV personality from his home on undisclosed felony charges. He was reportedly booked for ‘domestic abuse’. He was later released for $50,000 bail in the afternoon but reports suggest that the seriousness of the crime is enough to see him face charges in the future.

An LA police officer revealed that Jay Mariotti was arrested by the Pacific Division of the LAPD after a ‘domestic incident’. It has been reported that the popular ESPN sports reporter was arrested in the wee hours of Saturday after an altercation with his girlfriend in an LA nightclub. He was slapped charges of ‘domestic abuse’ within an hour of the arrest that took place,reportedly, in his house. It has been reported that the 51 year old attacked her at his LA residence from where the call to the police was also made.

Jay Mariotti is a well known face on ESPN and also a popular sports columnist for AOL. He appears as a panelist on the show ‘Around the Horn’. He was also a columnist for the Chicago Sun-Times for a long time before getting the axe on the job. None of the parties could be contacted for further details on the arrest. Jay Mariotti was also in the news when he defended Tiger Woods when it was alleged that the World No.1 golfer was abusive towards his wife. More details about the arrest and the crime is expected to trickle in in the days to come.