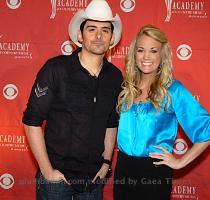 SAN FRANCISCO (GaeaTimes.com)- Country music’s biggest night is less than a week away and fans all over the world have been busy scrambling the web to get the details and the list of nominations for the year. The CMAs 2010 will be aired live on ABC this year and the gala event will be hosted by country star Brad Paisley and Carie Underwood. This is the third time that the two stars will be hosting the CMA and the award night promises to have some other starry performances as well.

The CMA has already released a promo video of the 2010 awards and it features the two hosts discussing what the fans can expect from this year’s show. The 44th CMAs promises to showcase the best of the new country talent and also recognize the legends who have shaped the industry over the years. Leading the nominations this year is country music star Miranda Lambert and new recent country sensation Lady Antebellum. The singer and the group share a total of 14 CMA nominations and will also be competing against each other in the highly coveted ‘Entertainer of the Year’ category. Both have chart topping hits that include Lady Antebellum’s ‘Need You Know’ and Miranda Lambert’s ‘The House That Built Me’.

Performing live at the CMAs 2010 will be Hollywood star and singer Gwyneth Paltrow, Kelly Clarkson, Blake Shelton, Jason Aldean and many more. Former ‘American Idol’ sensation Kelly Clarkson will be sharing the stage with country singer Jason Aldean for a duet, according to the reports. The show will be aired at 8pm on November 10 and more details of the performances and nominations are expected to trickle in.