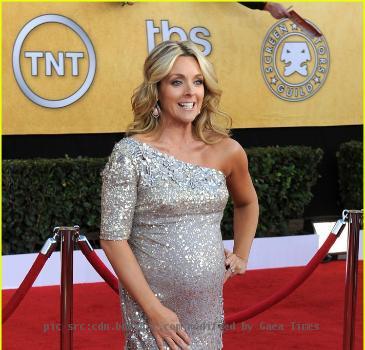 LOS ANGELES (GaeaTimes.com)- SAG Awards 2011 Red Carpet might have witnessed some of the most beautiful clothes and make ups. With plunging necklines, becoming the dominant style for the evening, it was not sans of fashion disasters by the hotties of Hollywood.

Jennifer Lawrence might have tried to make a bright appearance at the SAG Awards 2011 Red Carpet, but it turned out to be rather shocking, with the hot pink gown, which may be termed as tacky by the high profile designers. However, just the color was not the end of the disaster. The black belt, the numerous sleeves, and her uncoordinated eye make-up with the wrong earring, was a complete mess. Amy Adams was probably thinking about something else when her clothes was being designed. The disastrous design that garnered something like a waterfall in its bottom, was sadly placed at the wrong strategic point in her front. No more comments on that. Did Helena Bonham Carter want to sport a beehive on her head? Even her black and white dress revived the reminisce of the crazy retro era look, which is termed as “fashion disaster” in the twentieth century. Claire Danes, could dare to think about painting her nails red, while her dress was printed in green and black. The feminine dress would have otherwise looked good, had she not used that sporty masculine belt to spoil its essence completely.

We understand that it involves a lot of pride to be an expecting mother. However, making the baby bumps so conspicuous is definitely not a good idea in an award ceremony, Natalie Portman. The dress that she wore for SAG Awards 2011 Red Carpet, was too tight around her tummy and waist. Even Jane Krakowski followed Natalie Portman’s footsteps, to reveal her big baby bumps, that was tightly covered with a gray Badgley Mischka dress.