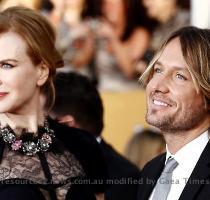 LOS ANGELES (GaeaTimes.com)- Sunday night it was a complete star studded show at the Shrine Auditorium, Los Angeles which was the venue chosen for the Screen Actors Guild Awards 2011. As one after another star showered through the red carpet making their way for the event, Hollywood actress Nicole Kidman along with hubby Keith Urban chose to halt at the red carpet for sometime for unleashing a secret.

The couple chose the Screen Actors Guild Awards 2011 as the platform for telling the world as to why they had kept the news of their surrogate daughter Faith Margaret a secret. The Aussie actress divulged that she did not want to miss out all the happiness and joy that she got when she revealed the news of her daughter. Had she told everyone about it prior to the child’s birth it would not have given her the same kind of happiness that she received afterwards. Nicole Kidman said that she wanted to share the happy news with every one. Most importantly she wanted to protect every one who was involved in this surrogacy thing. The actress admitted how difficult it was for her to keep the whole thing a secret.

The child who was born in Nashville via a surrogate has been named Faith because that was the thing which the biological parents had to keep through out the whole process. Her last name Margaret has been added after Nicole Kidman’s own grandmother. While the actress remained busy speaking about the new member in the family, Keith Urban showed off pictures of their little daughter while the couple were on the red carpet of the Screen Actors Guild Awards claiming that she looked much like his loving wife.

DHAKA - An India cultural festival with art exhibitions as well performances by Indian artists is be...
Copyright© 2011 The Gaea Times