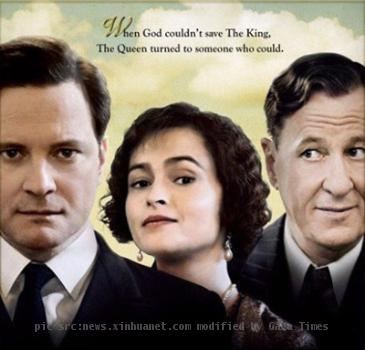 LOS ANGELES (GaeaTimes.com)- SAG Awards 2011 chose “The King’s Speech” for its Outstanding Performance by a Cast in a Motion Picture, thereby making the film rule, in each and every award ceremonies. Even in the Golden Globe Awards, Broadcast Film Critics Association Awards 2010 and Directors Guild of America Awards 2010, the film won the best film award. The constant victory on the part of the film, has made it one of the most successful films of the year, although the commercial success rate of the film was just 50 percent.

Tom Hooper, the director of “The King’s Speech” was inspired by his mother to direct the film. He said that his mother came up to him and said that she found his next film, after she read the story of King George VI. He jokingly deduced the moral of the story, “Listen To Your Mom”! Even David Seidler, who was the screen writer of the film, was a stammer, when he was small boy. He said that he heard a speech of King George VI, on radio, during the World War, and decided, that if he can overcome his drawback, then so can he. The film is still one of the most anticipated front runners for the Oscar Awards, which will be taking place in just a month. SAG Awards 2011 also chose Colin Firth, for the best actor category for the same film, while Natalie Portman, is still reigning to be the best actress for the year, in almost each and every award ceremonies. Natalie Portman said that she worked really hard and was trained for several months to portray her role with full conviction in the movie.

Apart from the SAG Awards 2011, she was also the proud recipient of Screen Actors Guild Awards, Golden Globe Awards and Toronto Film Critics Association. Similarly, Colin Firth, is rapidly adding on to his achievement, with a string of awards that has already counted up to more than 24, for his performance in “The King’s Speech”.