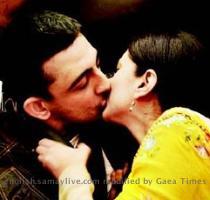 MUMBAI, INDIA (GaeaTimes.com)- Mallika Sherawat may not take this too kindly! Yes, the bombshell’s record of 17 kisses in “Khwahish” has been broken by the new power-packed couple Aditi Rao and Arunodoy Singh in Sudhir Mishra’s latest “Yeh Saali Zindagi”. The actors have set a new record with their endless kisses which comes to 22 in the movie. The reason behind the liplocks is clear. Every time the couple fights, they make it up with the kisses. Director Sudhir Mishra himself said that the script demanded the couple to fight a lot!

Aditi Rao and Arunodoy Singh play a couple based in the city of Delhi. It did not seem much problematic to Arunodoy Singh for the actor was last seen making some wild love to Raima Sen in “Mirch”. Aditi Rao is the actress who played Sonam Kapoor’s aunt in “Delhi 6″. Director Sudhir Mishra said that in his directorial career he has not seen many who have readily agreed to do kissing scenes. Earlier he had wanted to incorporate kisses in his movies for he feels that kissing is much more aesthetic than the other vulgar acts like hip shaking. He confessed that in many cases his plans had failed since many actors were not willing to go for the act.

The film’s title “Yeh Saali Zindagi” has already set some controversy with the censor board and now it remains a big question if they will let allow all these smooching scenes . However, director Sudhir Mishra said that he is not much concerned about what the board does ultimately. While Arunodoy Singh is the grandson of eminent politician Arjun Singh, Aditi Rao is already married to actor Satyadeep Mishra. Both the actors at first were a bit apprehensive about how their families would take this but gradually overcame the hesitation with now setting a new record.

GUANGZHOU - India's Arvind Bhat moved into the pre-quarters after he received a walkover from Sri La...

GUANGZHOU - The Indian men and women's badminton teams bowed out of the first round after losing to ...

CHANDIGARH - Due to financial constraints, Milkfed Punjab has been unable to take legal action agai...