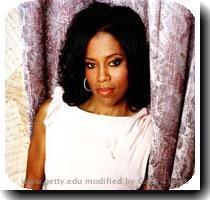 LOS ANGELES (GaeaTimes.com)- Regina King’s personal life is on a swing, as reports are on, that she and her beau for two years, Malcolm-Jamal Warner, are all set to start a new life. Sources have said that the two are living together right now, in their new Los Angeles home, along with Ian Alexander Jr, the thirteen year old son of the actress, whom she gave birth to, from her previous marriage with Ian Alexander Sr.

Recently, Regina King was featured in a cover page of a famous entertainment magazine’s February issue. Posing in a hot beige colored dress, the actress talked about her courtship with Malcolm-Jamal Warner. However, she did not comment anything about their live in relationship, which recently became the buzzing topic of discussion in the town. Reports says that Malcolm-Jamal Warner treats her son as his own, and the three are living peacefully like a happy family. They would also get married very soon, as their commitment took a serious turn. Regina King calls her boy friend her “soul mate”. She also said they have a lot in common, as both of them started their career as child actors, and have been imbibed with good values right from their childhood.

According to the sources, the Regina King has finally found her love, after a turbulent relationship with her ex-husband, who she accused of physical torture, drug abuse and infidelity. On the other hand, Malcolm-Jamal Warner also found solace in Regina King, after his ex-fiancee, actress Michelle Thomas’ death due to stomach cancer in 1998, which left him devastated for many days. Sources say that the two have been good friends for several years, but in 2008, their friendship turned into love, and it is getting all more intense each day.

BERLIN - Alina Treiger, the first woman rabbi in Germany since the Holocaust, was ordained by libera...

Remarks by the President at White House Science Fair

Sheriff: Infant among 5 dead in Ohio house fireBARTLES, Ohio â A fire swept through a 12-bedroo...

CDC chief picks 6 'winnable battles' in healthATLANTA â Where would you start if you were charg...

Singer/songwriter REGINA SPEKTOR is to headline a benefit concert in New York for her tragic cellist...

Theater Review: Greedy siblings outfox themselves in a stylish version of 'The Little Foxes'