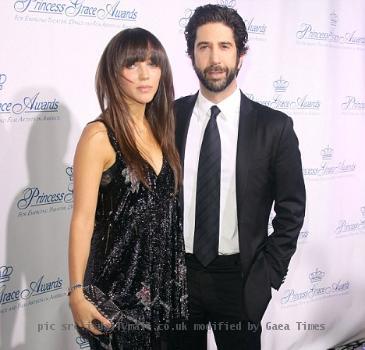 LOS ANGELES (GaeaTimes.com)- Former “Friends” star David Schwimmer and his wife Zoe Buckman must be on cloud nine these days as the couple would soon experience the bliss of parenthood. The couple recently announced that they are expecting their first child together. David Schwimmer and Zoe Buckman began dating in 2007 and in 2010, they announced their engagement. The couple tied the knot in a private ceremony, away from the media glare in the same year (June). However, the couple kept the news of their marriage under wraps until October.

The representative of David Schwimmer and Zoe Buckman announced that the couple is thrilled at the new lease of their lives. However, the couple did not announce anything more about the date of delivery of the child. The media outlets reported that the couple is flooded with congratulatory messages from the fans, friends and family members after they announced the news of the child. The “thrilled” couple is presently enjoying the festive season of Christmas and New Year in Britain.

“The Wonder Years” actor met Zoe Buckman in 2007 in London. Zoe Buckman was a waitress in the Cuckoo Club in West End and she served David Schwimmer’s table when the actor visited the restaurant. The couple fell for each other in a short span of time and Zoe Buckman left her home in Stoke Newington and moved to Los Angeles to stay with him. Previously, in one of his interviews, David Schwimmer said that he is would start his family once he feels that he is ready to take the responsibilities. In 2006, the actor said that he is ready to wait till he wants it from his heart to settle down and start his own family.

LONDON - A report has revealed that teenagers are increasingly posting explicit images of themselves...

LONDON - The ex-boyfriend of Indian-origin teen Asha Muneer, who was stabbed to death in Reading, UK...

LONDON - Actress Carey Mulligan wants a tattoo of a seagull on her right wrist to remind her of the ...

NEW DELHI - There was high drama late Thursday as Australian Sally Pearson was disqualified for fals...