“Skating With The Stars” Winner Announced 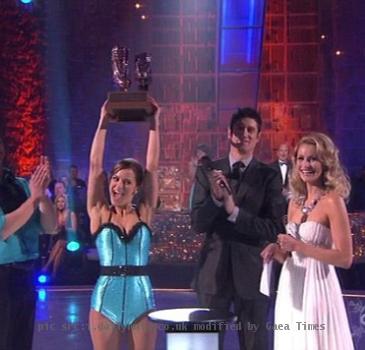 LOS ANGELES (GaeaTimes.com)- Soap opera star Rebecca Budig managed to beat reality star Bethenny Frankel in the inaugural season of “Skating with the Stars“. The loyal fans of the ABC dance reality series watched the American actress win the much coveted trophy and golden boots. The actress was all in praises for her dance pro Fred Palascak and gave all the credits of her win to him.

Rebecca Budig was one of the strongest contestants of the show who gave marvelous performances in every episodes. She became the favorite of the judges by scoring perfect scores in most of her performances. The winner was overwhelmed with emotions after the hosts announced her name as the winner of the series. Rebecca Budig seemed falling short of the words as she hold the trophy of “Skating with the Stars” competition. The soap opera star said that she is shocked as she did not expect that she would bag the much coveted trophy. However, Rebecca Budig said that her dance partner made her dream come true by being such a wonderful teacher. In her finale performance, the actress scored perfect 60 after her two performances, received appreciation from the judges as she wowed the crowd with her wonderful dance.

Like “Dancing with the Stars”, by combining judges’ scores and audience votes, the winner is declined. The second runner up of “Skating with the Stars“, Bethenny Frankel said that Rebecca Budig deserved the trophy and she should be a “real ice skater”. On the other hand, the gorgeous reality star added that she performed for her fans and for that she does not approval of the judges.