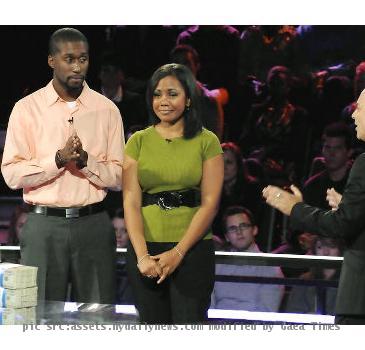 LOS ANGELES (GaeaTimes.com) “Million Dollar Money Drop” made its debut on Monday night with a two-hour episode. The manner in which the premiere episode unfolded, it was able to hog the attention of the viewers and keep them asking for more.

Fox channel is copying a scheduling strategy that was first used by NBC in 2005. “Million Dollar Money Drop” consists of a 2-person team of contestants who are in a relationship. 60 seconds is provided for the first 3 questions, 75 seconds for the next set of three. The contestants decide the amount of money that they could afford to risk on each of the possible answers. The show is hosted by noted actor and comedian Kevin Pollak. He says that there is an element of human drama in the show, which makes the game extremely stressful. The much-acclaimed host goes on to say that one of his favorite parts of hosting the show is that since the contestants come in a couple, they bring entertaining elements to the show. It takes the approximately 9 seconds for them to forget they are in front of the camera and get immersed in the game.

In a conference call with reporters this month executive producer Jeff Apploff said that having the real money right in front only adds to the drama. Ha says that 99% of Americans have never seen such a lot of money or have ever touched it. “Million Dollar Money Drop” show has already been successful in creating quite a buzz among the viewers who are eagerly waiting for the upcoming episodes of the Fox series.