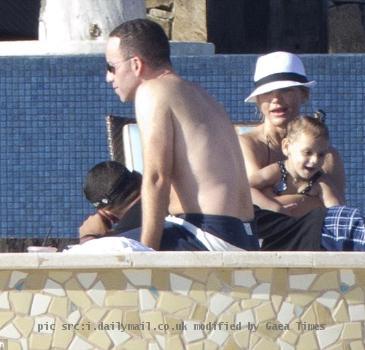 MEXICO (GaeaTimes.com)- Renowned actress Cameron Diaz, who sparked rumors that she is no longer with her beau Alex Rodriguez has proved the media wrong as she was spotted with the baseball star and his two daughters in Miami and Mexico. The couple started dating early this year and reportedly broke up in October. However, recent photos that surfaced on the web shows the gorgeous actress soaking up the sun in a white dress and later in a black bikini and enjoying her holidays with Alex Rodriguez’s daughters.

The photographs show that the “Vanilla Sky” actress cuddling Alex Rodriguez’s daughters and having a nice time with them at a poolside in Mexico. It seems that Alex Rodriguez is all set to make Cameron Diaz a part of his family and hence he took his daughters along with him in Mexico to spend their Thanksgiving weekend together. Alex Rodriguez also seemed comfortable and relaxed as he watched his lady love enjoy her time with his daughters. The pair is, reportedly, preparing to celebrate Christmas together.

Cameron Diaz previously said in one of his interviews that she supports her friends who do not want to have a child. However, when the media outlets asked her about her personal views, the stunning actress said that she does not know what future holds for her. Cameron Diaz was previously linked with actor Matt Dillon, singer/actor Jared Leto and singer Justin Timberlake. New York Yankees’ third baseman Alex Rodriguez exchanged vows with Cynthia Rodriguez in 2002 and in 2008. However, the marriage ended soon after Cynthia Rodriguez filed for divorce citing “emotional abandonment” and his extra-marital affairs as the reasons for their split.

LONDON - A boy in Britain helped catch a thief by clicking his photograph and posting it on Twitter....

SYDNEY - Australian vice-captain Michael Clarke is suffering from back soreness and is doubtful for ...

Man U all set to sign Danish keeper Lindegaard

Ferguson's secret dream was to manage Barcelona once in his life

LONDON - Manchester United manager Sir Alex Ferguson has revealed that his secret dream is to manage...