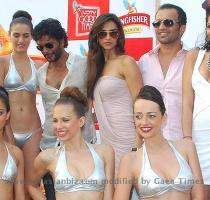 MUMBAI, INDIA (GaeaTimes.com)- The hottest calender of the year, the Kingfisher Calender, has been inaugurated once again for the year 2011. Needless to say, that a few hot and oomphy minimally dressed swimsuit models have made their way into the 12 pages of the calender to make it one of the most tempting and desired calender of the year.

Kingfisher Calendar 2011 has been inaugurated yesterday by none other than the steaming hot Salman Khan and the liquor Baron Vijay Mallya. The inauguration was also attended by other Bollywood stars like Yana Gupta, Sameera Reddy, Deepika Padukone, Sidhartha Mallya, Milind Soman and Dino Morea. The Kingfisher Calender is regarded as one of the most awaited possession for every man who loves playing with their temptation, with the snaps of curvaceous models posing alluringly in its pages. This year too, the calender has featured six bikini babes. However, the most irresistible of them is Angela Johnson, the same person who won the Kingfisher Swimsuit Model hunt. The photoshoot of the calender was done long back at an exotic location in Le-touessork in Mauritius. The person who captured these invitingly sizzling models in his shutter was none other than Atul Kasbekar, the ace fashion photographer in the world of glamor. Sidhartha Mallya, the baron’s son, was extremely delighted all through out the event. He said that it was really ‘overwhelming’ to be surrounded by so many pretty, silver bikini cladded model. According to him, every women featured in the calender had a unique charm and quality.

Inauguration of the Kingfisher Calendar 2011 is the second time that Salman Khan attended the event. He said that Vijay Mallya is a very nice person, and whenever he would ask him to attend an event, he would be present. Well, in any case no one would like to miss a chance to be surrounded by six bikini babes in an event organized by the liquor baron.

PANAJI - Women's rights groups in Goa are opposing the sale of liquor close to the venue of the 41st...

PANAJI - International Film Festival of India (IFFI), held at Goa every year, has given respectabili...

MUMBAI - Kingfisher Airlines Monday reported a net loss of Rs.230.81 crore in the second quarter of ...

MUMBAI - The Central Bureau of Investigation (CBI), in surprise raids carried out on the offices of ...

HAFLONG - The tranquillity of Jatinga, a scenic village nestling among the Borail Hills range, is sh...

THIRUVANANTHAPURAM - The second busiest airport in Asia and the fourth busiest in the world, Haneda ...
Copyright© 2010 The Gaea Times