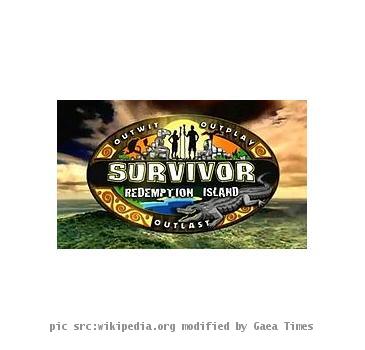 LOS ANGELES (GaeaTimes.com)- Last night, all the ardent followers of the CBS reality series ‘Survivor’ were able to catch a glimpse of the first pre-view of the upcoming season of the show scheduled to make its debut next year. The forthcoming season which has been titled ‘Survivor: Redemption Island‘ is sure to leave the viewers asking for more as for the very first time, the reality program is undergoing a makeover with a transformation in its format.

The finale of the ‘Survivor’ season 21 in which 21-year-old Jud ‘Fabio’ Burza emerged as the winner grabbed all the more eye-balls as the viewers got a sneak peek into the upcoming season. The ‘Survivor: Redemption Island’ which is all set to premiere on February 16,2011 is likely to turn into a breath of fresh air for the viewers with its new concept according to which, the eliminated contestants would get another chance to re-enter the competition despite being voted out.

While divulging details about the makeover that ‘Survivor: Redemption Island‘ is receiving, host Jeff Probst said that as per the new concept when a contestant is eliminated, he would not head back home but instead goes to an island where later he would battle it out with another eliminated contestant. Following the duel, the winner would again have a chance to win the show and take home the prize money while the loser would go back home. Although the new concept has already managed to seize the attention of the viewers, whether the endeavor would indeed translate into a success is something that remains to be seen.