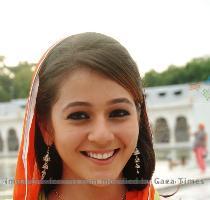 MUMBAI, INDIA (GaeaTimes.com)- Somebody’s loss is somebody’s gain. Yes, this is exactly what happened with Priyal Gor and Sara Khan. Freshly evicted from “Bigg Boss 4″ Sara Khan has bagged the lead role of Zee TV’s one of the top prime shows named “Ram Milayee Jodi”. As a result, Priyal Gor who plays the role of the current female protagonist called Mona in the serial will be seen taking a leave from the show. No doubt Sara Khan is glad about this as she did not have to wait long for her hands to get full after her elimination from the hit reality show of Indian television.

Rajita Sharma, producer of “Ram Milaye Jodi” apparently cites the reason for the replacement as some attitude problem. Reportedly, it is Priyal Gor’s attitude which has created some tension on the sets of the popular daily show. Attitude problem is not something new with the heroines. It seems the unit members did not take this act of Priyal Gor too kindly. As a result, the show producer decided to sack the actress and rope in Sara Khan as the leading lady.

Sara Khan on being questioned about this new gain, chose not to speak about Priyal Gor. However, the actress says that she is pretty excited about her new serial. The actress who rose to fame with the hit soap “Sapna Babul Ka…Bidaai,” said that she liked the script a lot, which is why she did not waste a single minute in agreeing to the offer that Zee TV had approached her with. Now, it remains to be seen whom the audiences prefers more in the role of the chirpy Punjabi girl Mona.