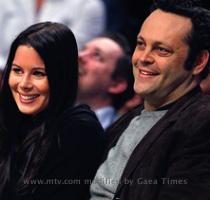 CHICAGO (GaeaTimes.com)- Kyla Weber and her husband actor Vince Vaughn are super excited with the birth of their first baby, Locklyn Kyla Vaughn. The baby was born on December 18, in a Chicago based hospital. Chicago is the hometown of the “Wedding Crashers” star. The newborn weighs about seven pounds and measures 20 inches.

A source, who happens to be a very close friend of the couple, has stated in an interview, that both Kyla Weber and Vince Vaughn could not be happier, while they brought their sweet little baby girl into their family. However, the most amazing part of the baby is her unique name. “Locklyn” is a rarely heard name in United States. It means land of lakes in Scotland. “Lachlan” however, is a common name in Australia. The couple decided to give a more feminine feel to its meaning, and call her “Locklyn”. Kyla Weber and Vince Vaughn got married in January 2010. It seems the couple are deeply in love and therefore got ready to feel the bliss of parenthood quite early in their nuptial life. With the addition of the baby in their family, their relationship is bound to get more stronger in the future.

Vince Vaughn opened up to a source saying it is the first time that he wanted to have kids, because he was saturated with the success in his career. He got bored of the professional success and wanted to play the role of a father and enjoy the other non-materialistic things in life. Kyla Weber opened about her pregnancy in July, just six months after their wedding.

Galimore among those at bittersweet reunion for 1980 Olympic gymnastics team

WASHINGTON - A new study has claimed that good school leadership is critical to good education. Re...

Vince Vaughn to be dad

LONDON - American actor Vince Vaughn is set to become a father soon. According to the sources, t...

WASHINGTON - A slight delay in school start time is likely to be associated with significant improve...

Ash delays and reroutes trans-Atlantic flightsBRUSSELS â The Icelandic volcano with the unprono...