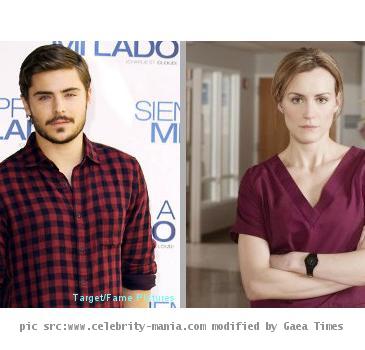 LOS ANGELES (GaeaTimes.com)- Last week, the media outlets reported that “Charlie St. Cloud” actor Zac Efron and his longtime girlfriend Vanessa Hudgens have parted ways. The couple, reportedly, insisted that there is no third party involved in their split. However, in a recent development, a reputed American gossip site reported that Zac Efron has become “good friends” with his co-star Taylor Schilling. The duo are presently shooting for the movie “The Lucky One”.

Though there is still no confirmation of the news, the sources close to the movie “The Lucky One”, reported that Taylor Schilling is supporting the actor to cope up in his difficult time after a break up. The sources claim that the relation between both of them has not yet turned romantic but Taylor Schilling and Zac Efron are quite friendly on the sets. The co-stars at times eat together, joke with each other and also rehearse together. The gossip portals are presently speculating if there is any romance brewing between them.

Zac Efron was recently spotted with “Twilight Saga” fame Kellan Rutz and his friends in New Orleans. An insider reported that it might be Kellan Lutz and his friends who influenced Zac Efron to call it quits with her girlfriend. However, the insider claims that Zac Efron and Taylor Schilling’s relationship is nothing out of the ordinary. Troy Bolton of “High School Musical”, reportedly, broke up with her girlfriend Vanessa Hudgens last week . However, Vanessa Hudgens’ friend, reportedly, told a reputed media outlet that the “High School Musical” co-stars are still friends and in good terms with each other.