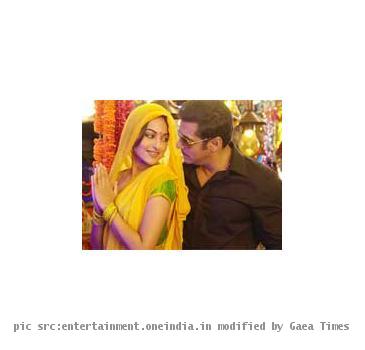 MUMBAI, INDIA (GaeaTimes.com)- The star studded event of Big Star Entertainment Awards saw who’s who of Indian film fraternity walking the red carpet. The stars walked the red carpet of the award ceremony in their best attires to win their coveted awards for the night. Many commendable films released this year which received rave reviews from the critics as well the audience. However, the movie that stole the show was Salman Khan’s super hit blockbuster flick “Dabangg”. The award show will be aired on December 31 on Star Plus.

According to film pundits, this year was not so great in terms of box-office collection of the movies. However, “Dabangg” reportedly broke all the records with overwhelming response and box-office collection. The other movies that fared well in the box-office were “Golmaal 3″, “My Name is Khan”, “Raajneeti”, ” Once Upon A Time in Mumbai”, “I Hate Luv Storys” and “Housefull”. However, last night it seemed that the Hindi action flick was the center of attention of Big Star Entertainment Awards as it nabbed 5 important awards of the night. “Dabangg” received award for the Best Film, Best Director (Abhinav Kashyap), Best Entertaining Song (”Munni Badnaam Huyi”), and Best Playback Singer (Rahat Fateh Ali Khan). Renowned and veteran actor Salman Khan won the Best Actor award.

It seems after a long time the “Maine Pyar Kiya” actor Salman Khan has received Best Actor award for his performance in a movie. The other celebrities, who were present at the prestigious event of Big Star Entertainment Awards include Amitabh Bachchan, Aishwarya Rai, Karan Johar, Rajkumar Hirani, Vidya Balan, Vidhu Vinod Chopra, Tina Ambani, Rajkumar Hirani and Sushir Mishra, to name a few. Legendary actor Dharmendra received Big Star Entertainer award for his contribution in the film industry for 50 years.

LONDON - When you detect an object flying at your head, you first move out of the way and then you t...