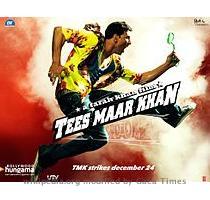 MUMBAI, INDIA (GaeaTimes.com)- With the festivities of Christmas just round the corner, its just the perfect time to unwind and have some gala time with your family. What better way to do so than watching a typical Bollywood masala movie with the much-needed dose of drama, comedy and action which would keep you asking for more. It seems that Farah Khan has chosen the best time of the year to release her latest venture ‘Tees Maar Khan’ starring none other than Bollywood bigwigs such as Akshay Kumar and Katrina Kaif. The sizzling chemistry between the lead pair of the action comedy film is not something new to the audiences and with Farah Khan assuming the directing responsibilities, ‘Tees Maar Khan’ is surely one of the must-watch flicks of the season.

As expected the anticipation surrounding ‘Tees Maar Khan‘ is skyrocketing among the audiences and the producers of the movie are doing their best to ensure that the hype about the flick among the audiences reaches to a new level. Despite the fact that unlike all the previous releases of Farah Khan, movie-goers would surely miss the presence of Bollywood superstar Shahrukh Khan, the star power of ‘Tees Maar Khan’ is sure to result in more footfalls in the theaters.

‘Tees Maar Khan’s which is all set to hit theaters across the country on Friday tells the tale of a notorious thief played by Akshay Kumar who is able to carry out outrageous robbery acts without being caught by the cops. A[art from Akshay Kumar and Katrina Kaif, the movie also stars Akshaye Khanna and a variety of other stars as special guests.

MUMBAI - Actor Akshay Khanna, who plays a funny overdoing actor in "Tees Maar Khan", would come as a...

MUMBAI - Bollywood actress Katrina Kaif has said there was nothing special in her passport, after fe...

'Tees Maar Khan' music to be launched on moving train

MUMBAI - Trust Farah Khan to always do things differently. Moving away from the usual glittering cer...
Copyright© 2010 The Gaea Times