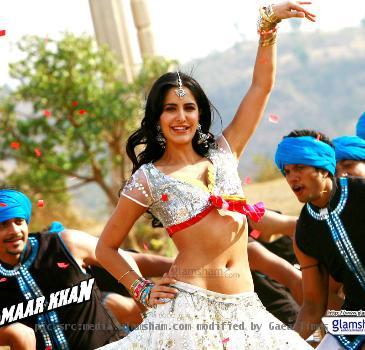 MUMBAI, INDIA (GaeaTimes.com)- The next flick of Farah Khan is surely on the verge of becoming the next hit in Bollywood. At least the craze that the songs of the flick have created say so although it has hardly been a few days since the songs were released. Yet, they created a rage all over the internet. One thing is for sure few “Tees Maar Khan” songs are not only spicy, but also sensuous.

The success of these songs may be attributed to the way they have been shot. The title song featuring Akshay Kumar, Katrina Kaif and other artists, is one of a kind. It not only entertains the audiences, but also gives a vivid synopsis of the story line. Moreover, the sizzling Akshay Kumar and Katrina Kaif pairing seems to put be putting the television screen on fire. People got all more excited over it because, this is for the first time in the career of Katrina Kaif, she is dominantly featuring in an item number, “Shiela Ki Jawani”. Her oomphy twist and turns, sporting a choli and a skirt has been igniting the audiences ever since it was released. This song is expected to create more moolahs, than the latest “Munni Badnaam Hui”, although both the songs have been sung by the same singer, Sunidhi Chauhan. “Tees Maar Khan” songs have been composed by Vishal Dadlani and Shekhar Rajviani, who are the best duo known for contemporary music right now.

“Tees Maar Khan” is all set to release on December 24. Although it does not star Farah Khan’s former best buddy Shah Rukh Khan, its songs clearly hint that the movie might turn into a smash hit.