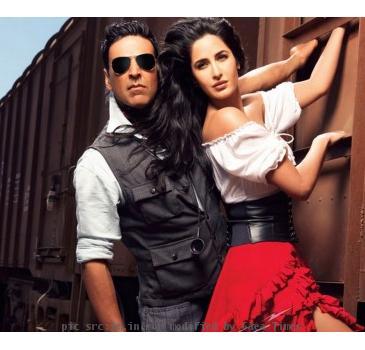 MUMBAI, INDIA (GaeaTimes.com)- The media buzz surrounding the upcoming Farah Khan directed ‘Tees Maar Khan‘ is growing with time. The film starring the hot pair of Bollywood namely Katrina Kaif and Akshay Kumar is going to be released around Christmas. This is going to be an acid test for Akshay Kumar whose films are faring really bad at the box office. His much touted ‘Action Replayy’ fizzled at the box office even though it had big banners and one of the most sought after actresses Aishwarya Rai in it. Director Farah Khan is confident about the success of her film and says that it will be full of entertainment. As for Actress Katrina Kaif she has tasted success in most of the films she has been paired with Akshay Kumar. She has appeared in a raunchy item number in the film as well.

Farah Khan said on the film ” I made sure there is a highlight in every reel, it’s a script written by my husband Shirish and it’s a mad and completely funny script”. A rumor is also doing the round in the industry that ‘Tees Maar Khan’ has been copied from ‘After The Fox’ a 1966 comedy. The similarity lies in the fact that Akshay Kumar essays a conman who assumes to be a film director and gets an entire village involved in carrying off a con act without their knowing it. Sirish Kunder the Writer-Producer of the film has strongly refuted such claims though.

‘Tees Maar Khan’ is going to be possibly the last big release of the year. The soundtrack of the film is likely to catch up with viewers.