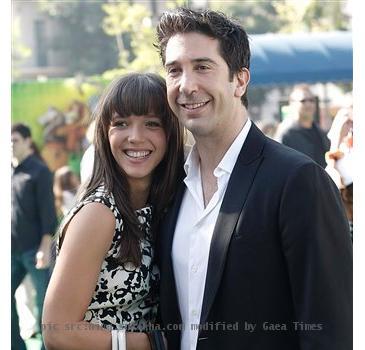 LOS ANGELES (GaeaTimes.com)- It has been reported that David Schwimmer, who is better known as Ross, thanks to the role he portrayed in the hugely popular series “Friends,” is all set to walk down the aisle. Reports say that he would be getting married to none other than his girlfriend of three years, the acclaimed photographer Zoe Buckman, whom he has been seeing from 2007. According to sources, David Schwimmer and Zoe Buckman had met in London, where David Schwimmer had gone to shoot for his film “Run Fatboy Run,” which he had directed, and where Zoe Buckman was working as a waitress.

The news of the engagement had been reported by the representative of David Schwimmer. However, the news of the engagement does not come as much of a surprise, as David Schwimmer and Zoe Buckman has been known to be a very bonded couple for the whole of the two years. Moreover, it has been reported that a few days back, Zoe Buckman had chosen to pack up all her life and had flown down to the United States where the two could be together. At present, it is a known fact that the two are living under the same roof of an apartment in Chicago.

It is well known that the two have been pretty serious about each other, despite the fact that there is considerable age difference between them, with David Schwimmer 43 and Zoe Buckman only 23. However, the couple does not seem bothered about such minor issues in their relationship. It seems that David Schwimmer has also commented that Zoe Buckman is the right one for him. This is going to be a first walk down the aisle for the lovebirds.