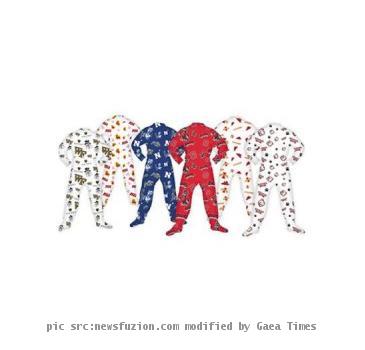 LOS ANGELES (GaeaTimes.com)- Some celebrities do have the habit of endorsing weird things for free, but pajamas? Recently, Ryan Gosling appeared on “Ellen DeGeneres Show” in a pair of Jumpin Jammerz pajama quite out of the blue. Needless to say that the popularity the show, coupled with the appealing image Ryan Gosling, facilitated in making Jumpin Jammerz, the latest buzz in the fashion market.

Ryan Gosling appeared on “Ellen DeGeneres Show” to promote his next flick, “Blue Valentine”, where he starred with the pretty Hollywood hottie Michelle Williams. However, as he entered the sets, the star made an attempt to deviate the focus of attention towards his outfit. Comfortable and ultra casual, the hunk was not expected to sport a pair of Jumpin Jammerz in the show. However, wearing them was probably not enough for the star. He even brought several pairs of Jumpin Jammerz for the audiences present in the set, and distributed them for free. Now is he trying to follow Oprah Winfrey’s foot steps? He also said that he almost swears on these pajamas as they are so “Wildly Comfortable”. Apparently, he does not feel like taking them off at all. No wonder why he did not change his outfit before coming on the show, and shocked several audiences.

However, one cannot deny that not only was he in a very philanthropic mood, but also in a very jovial state of mind while he was on the show. He humorously affirmed that he gave away the Jumpin Jammerz to the audiences to make them all more popular amongst the common people, so that he can even sport them outdoor and yet does not feel like a fool. He thereby started the “Jumpin Jammerz movement” right there.

Kansas remains runaway No. 1 in AP poll, Syracuse jumps from unranked to No. 10

Kansas still No. 1 in AP poll; Syracuse No. 10Syracuse was so impressive in the 2K Sports Classi...

LONDON - Katy Perry has revealed that she checks her stage outfits by skipping in a bid to prevent w...

Help Jack rescue his family from the demons of the underworld in this power-packed run 'n' jump adve...
Copyright© 2011 The Gaea Times