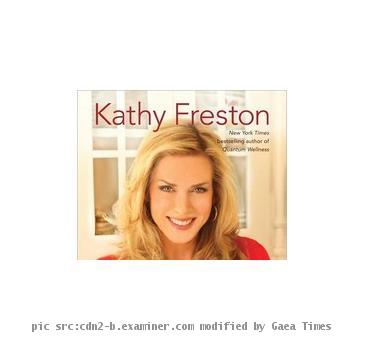 LOS ANGELES (GaeaTimes.com)- Kathy Freston was featured in the “Oprah Winfrey Show” yesterday. The fitness expert has always been a source of inspiration for the talk show host’s regular life style, and this time, Oprah Winfrey decided to promote her new book, “Veganist” through her show, resolving to abide by her endorsements of a proper vegan diet.

The book, recently written by Kathy Freston deals with the positivity of vegetarian diet and how it facilitates the proper health, mind and spirituality. It also reveals the importance of plant based food, to balance the ecology and conserve the nature. Oprah Winfrey has always projected herself as a socially aware citizen, who loves spreading peaceful messages to the audiences through her show. In this episode, the talk show queen and her 300 staffers decided to adopt a vegetarian diet, to not only promote the writer and her book, but also to spread the social awareness related to that form to eating habits. They discussed about the “ten game-changing promises” mentioned in the book, that would facilitate proper weight loss, boost immunity and thereby, make the world more peaceful, by curtailing animal killing for consuming them as food. The other guest along with Kathy Freston, was Michael Pollan. The two discussed about the other ways by which one can adhere to good health, by resorting to plant based food products and exercises.

However, this is not the first time that Oprah Winfrey resolved to resort to vegan diet. Even back in 2008, it was Kathy Freston, who inspired her to take up a one week challenge of sticking to vegan diet. Reportedly, Oprah Winfrey succeeded in executing the challenge and to completely give up eating meat, caffeine, alcohol, sugar, and gluten. Back then, Kathy Freston released her first book, “Quantum Wellness: A Practical and Spiritual Guide to Health and Happiness”.

Junk foods should be out of school canteens: NGO

Rachel Uchitel an unwanted guest at Carousel of Hope Ball

LOS ANGELES (GaeaTimes.com) -- Hocus Pocus is a 1993 fantasy movie based on Halloween theme. The mov...

WELLINGTON - A new survey has suggested that more than half of New Zealand's university-educated pro...
Copyright© 2011 The Gaea Times