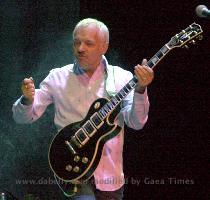 LOS ANGELES, (GaeaTimes.com)- For all those people who have been missing Peter Frampton for quite sometime, Oprah Winfrey gave them a relief once again, by inviting Peter Frampton on her show on Thursday. She has been giving special surprises for the last few weeks, when she had an interview with Michael Jackson’s children and then the last week, she reunited the entire cast of “Sound Of Music”.

This week was however not as exciting as the last one, but here too some of the most wanted celebrities like Shaun Cassidy, Jackie Jackson and the Backstreet Boys were invited on the show. Like usual the show had some unique and exciting moments while some juicy secrets were revealed. The juiciest part of the show was when Jackie Jackson from the Jackson 5, who turned out to be Oprah Winfrey’s teenage crush, gave a surprise visit on the show with flowers. This captured Oprah Winfrey with her most pleasant smile and wildest surprise. However, that was not the end of it, as he also asked Oprah Winfrey, 56, on a date. seems like love is in the year, as Jackie Jackson 59, recently got divorced. However, Peter Frampton sounded as beautiful as ever, which made it quite clear that he is not just a rock star but a genuine musician. He pumped up the spirit with his medley with Shaun Cassidy, with songs like “Hey Deanie,” “Da Doo Ron Ron,” and “That’s Rock and Roll”, for the first time in the last 30 years.

Peter Frampton was a cult rock star on the 70s, 80s and early 90s. However, it is not just music that marks his persona. He is a rigorous social worker and donates heavy amount for AIDS research programs in United States, United kingdom and other economically backward nations. His last album was “Thank You Mr. Churchill”, released on 27 April 2010.

BEIJING - A Chinese charity will donate home-made sweaters to abandoned and disabled children in six...