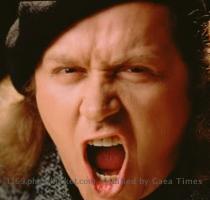 LOS ANGELES (GaeaTimes.com)- No one can forget the contribution of Sam Kinison to the world of comedy. The way he touched our hearts and funny bones can still be considered to be unparalleled. Comedy Central paid an ode to this immortal comedy star through its show, “Back From Hell: A Tribute To Sam Kinison“, which was aired yesterday at 10:00 PM.

The show was star studded with ace modern age comedians and stars like Chris Rock, Norm MacDonald, Lewis Black, Denis Leary, Kathy Griffin, George Lopez, and Richard Belze, who still consider Sam Kinison to be their role model and inspiration. They talked about his contribution to the world of comedy, his professional and personal life and the social impact of his bold yet responsible way of tickling the audience with intellectual punches of laughter. Their stand up comedy that commemorated Sam Kinison was one of its kind. The show also included some of the best vintage concert clips of Sam Kinison when he reigned the world of comedy shows back in the 1980s and 1990s. However, comedy was not the only thing that the show focused on. It also took up some of the controversial issues that included his indignities suffered at the hands of females and his rallies against the institution of marriage.

Chris Rock, who was on the show yesterday confessed that he is one of the biggest fans of Sam Kinison. In fact the only two people misses is his father and Sam Kinison. He said that he really wished that these two people were alive to witness his success, as the two of them had a great impact on his life. Sam Kinison breathed his last at a very young age, when his car crashed while he was heading towards a concert in 1992.

MELBOURNE - A traveller has been arrested for shedding his clothes in a bid to avoid being fris...

BEIJING - A 46-year-old Chinese woman has been sentenced to a year in labour camp for posting a ...

WASHINGTON - Love-rat Tiger Woods have opened up about his very public divorce by contributing an es...

GUNAGZHOU - Indian shooters continued to disappoint on the fifth day of the shooting competition of ...

WASHINGTON - Highly graphic images of the negative consequences of smoking have the greatest impact ...
Copyright© 2010 The Gaea Times