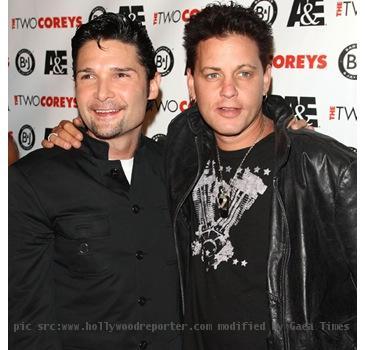 LOS ANGELES (GaeaTimes.com)- Actor Corey Feldman has lashed out at the Screen Actors Guild Awards that was held over the weekend for not including his co-star and close friend, the late actor Corey Haim in the event’s 2011 In Memoriam tribute. The ‘License to Drive’ star released a statement on Monday expressing his disappointment with the organizers of the SAG Awards for leaving out his deceased friend in the annual tribute to the actors who left for the heavenly abode the past year. The 17th edition of the Screen Actors Guild Awards took place at the Shrine Exposition Center in Los Angeles on Sunday night.

The statement that was issued by the 39-year-old ‘The Lost Boys’ star hinted that the fact that Corey Haim was omitted from the list of In Memoriam tribute of the SAG Awards did not come as a bolt from the blue for him as he has “become used to not being honored by our peers in the industry.” In the statement, Corey Feldman further went on to add that he hopes the Academy Awards which is scheduled to take place later this month, would be able to ‘make a wiser choice’ in the In Memoriam tribute to remember the stars that the world of entertainment lost in the last year.

In the meanwhile, SAG Awards producer Kathy Connell has reacted to the allegations made by Corey Feldman by saying that Corey Haim could not be included in the list owing to time constraints. The even producer said that the ‘License to Drive’ star was in the longer edition of the tribute but as event was running long, it had to cut short.