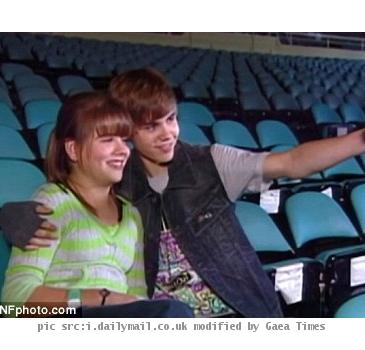 LOS ANGELES (GaeaTimes.com)- Two of the popular young stars of present generation namely Emma Roberts and Justin Bieber were seen on the sets of ABC’s popular TV series Extreme Makeover: Home Edition. The show was held for honoring the memory of Texas teenager Alexandra Brown and helping the Remember Alex Brown Foundation set after her name. The girl passed away in a driving and texting accident which left her family members shell shocked. Jeannie Brown the mother of the girl shared the experience of losing her lovely girl at a shockingly young age. The lady said recounting the experience of learning about the tragedy “The cell phone on which she had sent and receive over 10,000 text messages in the weeks preceding her accident was with her.”

On the eve of the teen’s death anniversary the Extreme Makeover team members gave a surprise to the Brown family by offering to rebuild their home which was almost crumbling. The family was touched and the inclusion of two popular teenage stars was the icing on the cake. Singer Justin Bieber showed his benevolent side at the program. He snapped pictures with the sister of the teen, Katrina Brown. The young girl said about her deceased sister “If Alex was here and seeing all this she would be so excited for us”. Her death prompted the family to develop the Remember Alex Brown Foundation.

The Remember Alex Brown Foundation makes people aware about the implications of texting when one is driving a vehicle. Young actress Emma Roberts was emotionally moved after she came to know of the incident.

PITTSBURGH (GaeaTimes.com)- For the fans of Oakland Raiders, Sunday's game against the Pittsburg...

LOS ANGELES (GaeaTimes.com)- While many will remember this year's American Music Awards for th...
Copyright© 2011 The Gaea Times