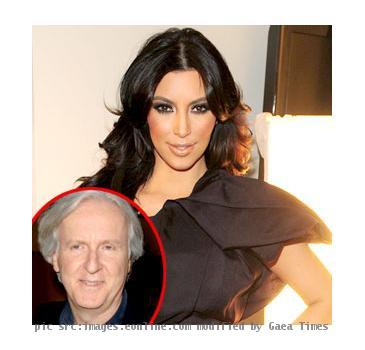 LOS ANGELES (GaeaTimes.com)- Although its just been a few days since ace director joined the bandwagon of celebrities on the micro-blogging site Twitter, the noted filmmaker is already flooded by requests from aspiring actresses for a role in one of his 3-D projects. One of the starlets to make the first move and take advantage of the social-networking sites’ accessibility was none other than the sizzling bombshell Kim Kardashian who requested the director to cast her in one of his 3D roles.

Soon after James Cameron joined Twitter on January 23, Kim Kardashian tweeted, “Welcome to our twit-world@JimCameron! I’m ready for my leading role in 3D! LOL.” To the stunning reality star’s request to cast her in one of his forthcoming projects, the ace director replied by saying, “Kim, you’re already in 3D! See you on Sanctum 2.” Well, whether the ‘Avatar’ and ‘Titanic’ director is actually serious about casting the 30-year-old socialite in the sequel of his latest film, is something that remains to be seen. While a movie with the reality star seems a distant possibility, James Cameron showed interest in working with Jessica Alba in one of his upcoming projects after the duo have already worked together in the television series, ‘Dark Angel.’

Its seems after ruling the roost on reality television, Kim Kardashian is now taking her Hollywood dreams quite seriously. Apart from requesting James Cameron for a 3D role, the sexy siren has also revealed in a recent interview, her desire to be cast as a Bond girl in one of the forthcoming projects of the James Bond series.