“The Sound Of Music” Reunion At Oprah 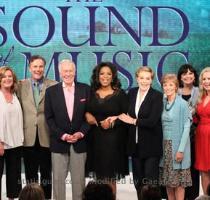 LOS ANGELES, (GaeaTimes.com)- The cult musical flick “The Sound Of Music” is still a ‘few of our favorite things’ and Oprah Winfrey is not an exception. Therefore, “The Oprah Winfrey” show took the opportunity to invite the entire cast of the 1965 cult classic, “Sound Of Music” yesterday. This included Christopher Plummer, Julie Andrews and the seven Von Trapp Children. They made their reunion on-screen for the second time, since the movie premier.

Not too many things have changed in them apart from their hair, which eventually turned gray after four decades. They revealed some of their cute secrets and recollected the sweet memories of their shoot in their reunion with Oprah Winfrey. Christopher Plummer, who was 34 at that time, said that he was not willing to take up the project, as the character of George Von Trapp lacked humor, and was a character, which was very different from his vivacious off-screen image. He was also apprehensive as his character was overshadowed by the beautiful nun. Julie Andrews said that she was quite nervous to work with Christopher Plummer, as he was more experienced and accomplished as an actor than her. However, all she could do was admire him, when they met. The eldest of the Von Trapp Children, Liesl, played by Charmian Carr, said that although she portrayed the character of a sixteen year old, she was actually 21 during the shoot of “The Sound Of Music”, and had a crush on her on-screen father. However, the father literally spoiled her screen daughter as the two used to hit the bars, told her about the darkest secrets of alcohol, and taught her how to drink.

The others who appeared on the show were Debbie Turner (Marta), Kym Karath (Gretl), Angela Cartwright (Brigitta), Heather Menzies (Louisa), Duane Chase (Kurt), Nicholas Hammond (Friedrich) and Dame Julie (the little Maria). “The Sound Of Music” reunion with Oprah Winfrey, was surely a nostalgic treat for all.