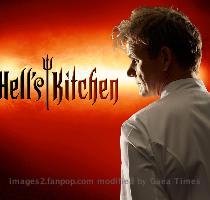 LOS ANGELES (GaeaTimes.com)- In a rather expected twist in Hell’s Kitchen, New York Chef Raj Brandston saw himself eliminated from the competition in spite of not being nominated or even in the losing team. The contestant showed shock when his elimination was announced but going by his performance in the latest episode, it was evident that he would not be lasting in the show.

Apart from Raj Brandston being eliminated in the episode, there was also a lot of drama in the challenge round where the men’s team found themselves in deep trouble. It was the women who came to their rescue during the challenge and their team was rewarded with a pool side lunch at a luxury hotel and trapeze lessons. In the ‘Dinner Service’ round Raj Brandston promised to step up his performance but failed yet again as his fish was either raw or burnt. Plus the sauce that he served in, was not appreciated either.

TORONTO - An Indo-Canadian deputy minister in Alberta province was Monday thrown out of his party f...