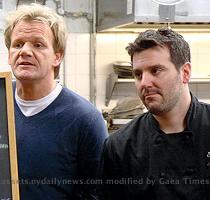 NEW YORK (GaeaTimes.com)- Although celebrity chef Gordon Ramsay is well known for his harsh and blunt remarks against the contestants of his reality series ” Kitchen Nightmares,” this is a comment that he now surely wishes he had never made. When New Jersey chef and restaurateur Joseph Cerniglia appeared on his show in the year 2007, Gordon Ramsay had warned the chef that his business was likely to ’swim down the Hudson River.’ Incidentally, the body of that was recovered by the New York police officials late last week from the Hudson River has been identified as that of Joseph Cerniglia.

Joseph Cerniglia’s body was pulled out of the Hudson River on Friday where it was found floating. Although the authorities have already undertaken a thorough investigation to ascertain the cause of the death of the 39-year-old chef, preliminary probe suggests that Joseph Cerniglia jumped off the Hudson River while the New York Medical Examiner has also dubbed the incident as a suicide case. Just hours prior to the recovery of restaurateur’s body from the Hudson River, a motorists had reported through a 91 call that he had seen a person jump off from the George Washington bridge into the river.

In the meanwhile, sources have revealed that Joseph Cerniglia is believed to have taken his own life and chances are high that he was man seen by the motorists standing on the George Washington bridge who later leapt to his death. The chef who gained fame during his reality television stint in Gordon Ramsay’s reality series ‘Kitchen Nightmares’ owned an Italian restaurant and had admitted in the program that he was facing financial troubles.