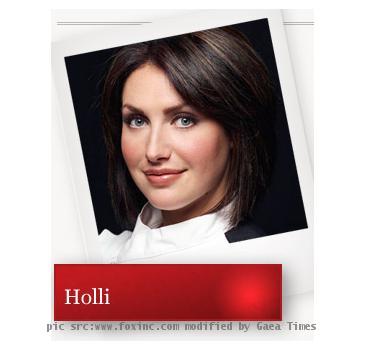 more images
LOS ANGELES (GaeaTimes.com)- People all over the world are now curious to know who won the latest season of ‘Hell’s Kitchen‘ with the final being aired on Tuesday night. The much anticipated finale saw the two finalist Holli Ugalde and Jay Santoz face off in the toughest challenge of the show. They were given the task of serving 5 dishes to 5 executive chefs from the UK. Though Jay Santoz won the first round of serving the appetizers with his fish and meat entree, it was Holli Ugalde who finally impressed the judges and Gordon Ramsay with the main course for the dinner.

‘Hell’s Kitchen‘ followed the usual routine of bringing back the earlier contestants for the title to assist the finalists. Jay Santoz an Holli Ugalde selected among the contestants to make their own team. Jay Santoz selected Jason, Benjamin and Fran to help him deliver his final service. His choice of assistants seemed to be a bad one as Fran was seen confused and clueless at one point in the competition. Jason too proved to be a bad choice as his lamb was found to be undercooked. It was Benjamin, on the other hand, who came to be of great use to Jay Santoz in the end. Holli Ugalde chose Autumn and Nilka to help her. Siobhan, who was not selected by any of the finalist finally went to Holli Ugalde’s team by default. Things went out of control when Holli Ugalde’s team members began o clash amongst themselves.

At the end, however, Gordon Ramsay declared Holli Ugalde the new chef at his Savoy Grill in London. He appreciated both the chefs and said that they have exciting futures ahead of them. Both the finalists of ‘Hell’s Kitchen‘ won a trip to Australia.