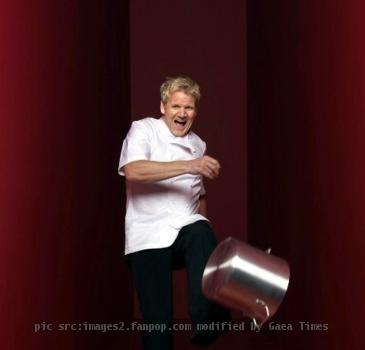 SAN FRANCISCO (GaeaTimes.com)- The new season of ‘Hell’s Kitchen opened on Fox this Tuesday. The show that has the hot-headed chef Gordon Ramsay drilling the contestants for the title and finally makes them the head-chef of an extremely important restaurant. For fans who are familiar with Gordon Ramsay’s temper, they can rest assured that in spite of the new look, the temper will be intact. Gordon Ramsay told the media that he is ahead of the curve when it comes to the competition dynamics between the contestants and therefore can catch them unaware at any point.

The first episode of the latest season called 7XO1 showed Gordon Ramsay presenting himself to the 16 contestants and dividing them into two squads, men and women. They are asked to prepare for a dinner party. Gordon Ramsay asks all the contestants to cook heir signature dishes. They are also told to learn the menu and prepare themselves for the dinner party service. Things don’t o as planned and as expected, they come in the line of fire in ‘Hell’s Kitchen’.

Three local contestants who have gathered a lot of interest among fans of ‘Hell’s Kitchen‘ are Ed Battaglia of Edgewater Park, Salvatore Coppola of Clementon, NJ and Siobhan Allgood, of Montgomery County. Al three have prior chef and training experiences. Siobhan Allgood is an out-of-work chef whose recent stints include working at Table 31. He was raised in Rockledge. Salvatore Coppola immigrated to the US when he was 15 and presently owns Coppola Pizza in Clementon. Ed Battaglia is a graduate from the Restaurant School and presently teaches cooking at the Willingboro’s Garfield Park Academy.