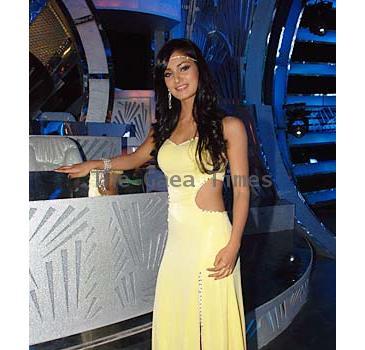 September 27, 2010 (Sampurn Wire): We all know about the dancing prowess of Mukti Mohan, who has shown her sensational moves in Star Plus’ ‘Zara Nachke Dikha’. But now the audience will get to see yet another talent of the girl… this time, in another genre.

While talking to an insider, TellyCafe.com found out that Mukti will be trying her hands at comedy this time. “Mukti Mohan, who was last seen in Sony TV’s ‘Comedy Ka Daily Soap’ with a dance performance on the stage, will now be seen with Manish Paul and Rajeev Thakur on ‘Comedy Circus Ka Jadoo’ doing an actual comedy act. She will be performing with these two comedians and is sure to make the audience fall off their chairs! The shoot has been completed and the episode will telecast in the coming week.”

We contacted Mukti and she confirms, “I have performed a comedy act and it was truly a great experience to perform with such good companions.”

So Mukti are you willing to step ahead into this industry as a comedian? “ Right now I am ‘Ok’ with everything because this is very initial stage for me in this industry and if given a chance then I am ready to take up any genre,” says Mukti.

We can't forget Indians' sacrifices for us: Bangladesh minister

AGARTALA - Bangladesh cannot forget the sacrifices made by Indians to help it gain independence in 1...

AGARTALA - Over 200 surrendered militants staged a silent protest outside the Police Headquart...

Voices of trifurcation gain in Jammu

JAMMU - Frustrated by what they term as New Delhi's indifference towards Jammu and Ladakh regions of...

JAMMU - Another Jammu group, the Kranti Dal, Tuesday joined the rising chorus against the central go...

Jharkhand cabinet to be expanded Oct 8