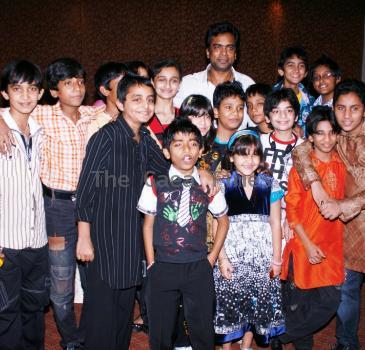 August 31, 2010 (Sampurn Wire}: Saibaba Telefilms Pvt Ltd, hosted an Iftaar Party for the Pakistani children from ‘Amul Chhote Ustaad - Do Deshon Ki Ek Awaaz’ that is shown on Star Plus. Gajendrra Siingh, the MD and Chariman for Saibaba Telefilms along with playback singer Sonu Niigaam along with the Indian contestants came together to convey their greetings.

The occasion held implication for the Pakistani kids, as they celebrated it with their neighbors from across the border. The contestants were happy and said that they felt at home thanks to this effort by the Saibaba Telefilms. This time ‘Amul Chhote Ustaad - Do Deshon Ki Ek Awaaz’ includes kids from India and Pakistan, battling it out for the ultimate prize.

Gajendrra Siingh, MD and Chariman, Saibaba Telefilms said that the show’s format is that of music with zero boundaries and that’s what they wanted everyone to feel. He further added that Pakistan has always been called a delightful hub of great endowment for the industry of entertainment and the show’s tie up with Rahat Fateh Ali Khan in scouting for young talent, is just a step in that whole process and philosophy.

Eid-ul-Fitr to be celebrated on Saturday

NEW DELHI - Eid-ul-Fitr will be celebrated in the National Capital Region (NCR) on Saturday, said...

POONCH - The army organised an 'Iftaar' (a ritual ceremony of breaking fast during Ramzan after dusk...

See below for clarification to a question (marked with an asterisk) posed in the briefing that requi...

NEW DELHI - Muslims marked the beginning of the holy Islamic month of Ramadan with prayers at vari...

Six militants killed in US drone attack in North Waziristan

ISLAMABAD - At least six militants were killed in a suspected US drone strike in restive North Wazir...