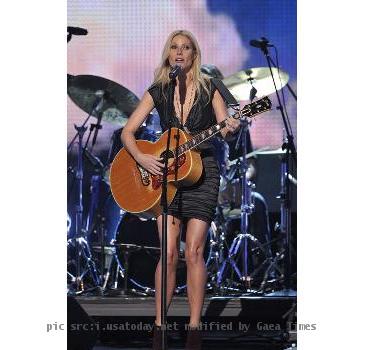 NASHVILLE (GaeaTimes.com)- Just a week ahead of her debut at Country Music Association awards, Academy award-winning actress Gwyneth Paltrow was so jittery about her performance that she found it difficult to sleep and also lost her appetite. However, when the “The Royal Tenenbaums” star went on stage during the 44th Annual CMA awards last night she was her confident best and went on to give a power-packed performance which was widely appreciated by the audiences. The large number of crowds who were present at the gala award ceremony not only cheered boisterously but were so impressed by Gwyneth Paltrow’s rendition of the title track from her upcoming flick “Country Strong,” that she received a standing ovation from the audience.

During the live performance at the CMA stage, Gwyneth Paltrow enthralled the audiences by performing the title song of her forthcoming movie “Country Strong” which enabled her to win wide accolades from the star-studded guests of the event. Adorning a black knee-length dress and an acoustic guitar hung over her shoulders, the 38-year-old celebrated actress turned in a stellar performance to the utter delight of her large number of fans. As Gwyneth Paltrow went on with her singing, she was backed by country music veteran Vince Gill who was singing along with her but never overpowered the Oscar-winning actress.

In a recent interview, Gwyneth Paltrow revealed that she became completely engrossed in country music and learnt to play guitar for her upcoming flick “Country Strong” where she plays the role of a troubled country star Kelly Canter. The noted actress divulged that she immersed herself in country music to get into the skin of the character.

Paltrow slams celebrity couples who flaunt relationship in the spotlight

LONDON - Gwyneth Paltrow has slammed celebrity couples for unnecessarily showing off their relat...

LOS ANGELES (GaeaTimes.com)- All the loyal fans of "The Walking Dead" were waiting with bated br...

LONDON - Hollywood actress Gwyneth Paltrow says she was reduced to tears and left with bleeding fing...

When Paltrow danced in a mini-kilt

LONDON - Actress Gwyneth Paltrow sang and danced in a mini-kilt and knee-high boots for the American...

LONDON - Gwyneth Paltrow has credited superstar pals Beyonce and Faith Hill with helping her to ...

NASHVILLE (GaeaTimes.com)- Just a week ahead of her debut at Country Music Association awards, A...
Copyright© 2010 The Gaea Times