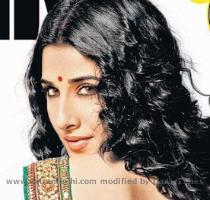 MUMBAI, (GaeaTimes.com)- Vidya Balan stunned her fans all over India by posing backless in the cover page of a renounced magazine for the November issue. Although she was half covered and partially draped in a saree, her curvaceous back was completely exposed, giving an intricate detail of her contour, which not too many people know about, as in most cases Vidya Balan prefers to retain her modesty.

The saree that she was wearing was a white chiffon, bordered with an intricate golden and green ‘zardousi’ work. The saree seemed to have hugged her body in the right way, and her sitting posture gave the ethnic, graceful, yet a very sensual Indian look. She was sporting a red ‘bindi’ with dark kohl, appearing like a Goddess. Although she was backless, she did not look vulgar. Vidya Balan commented that she is happy that people are getting bored of seeing women in bikini and therefore she has become very parochial about sexiness. She also added that saree is probably the sexiest dress that an Indian woman can sport as it covers the right amount and exposes the right amount. Indian drapes are truly tease according to her and she says that she loves teasing. True, anyone who would dare to see her backless would be teased by some way or the other.

If there is someone who feels proud to carry a saree more gracefully than any other heroin, it would be Vidya Balan. Although she has been much criticized for her poor sense of dressing, the sensuous actress did not give up and created a style statement of her own. She looked hot and more than titillating in the simple cotton and chiffon sarees she was sporting in “Ishqiya”. In this backless and carelessly draped saree, she proved that sexiness is not only about western clothes.

LUCKNOW - The manager of a private school in Uttar Pradesh's Unnao district was booked Friday in con...

GUANGZHOU - Indian guns blazed on the opening day of the shooting competition of the Asian Games as ...