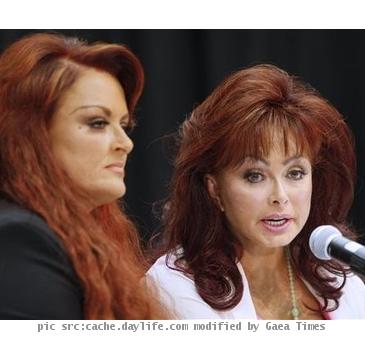 LOS ANGELES (GaeaTimes.com)- “The Oprah Winfrey Show” started off with a bang on September 13. On the very first day the host announced that she would take her audience to Australia. Last night’s show was liked and appreciated by the audience as the American singer and songwriter Naomi Judd and Wynonna Judd appeared on the show and shared their experiences with the host as well as the audience.

Naomi Judd said that she bonds better with her daughter now and acknowledge each other for who they are. Wynonna Judd even spoke about her ex-husband who was arrested for assaulting a girl. “To be Loved By You Singer” also said that when she turned 45, she had to go through the “horrible” divorce. She said she lost her family and “gained” herself because she was all alone with “God”. She said that the best revenge that anyone can take is by “living well”.

NEW YORK - Naomi Campbell's former agent has claimed having evidence to prove that the supermode...

LONDON - Naomi Campbell's rep has dismissed claims that the supermodel lied under oath while testi...

Campbell accused of lying about ex-manager's profits in perfume dispute

Galactic clouds could help us trace Sun's journey through space

MELBOURNE - Scientists may have found a new tool to trace the Sun's journey through our galaxy, the...

WASHINGTON - Actress Naomi Watts, who plays an ex-CIA agent in a new movie, is hoping that her ...