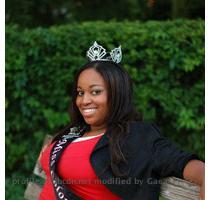 DENVER, (GaeaTimes.com)- Miss Black Colorado pageant was staged yesterday and Laurie Pierce was awarded as its winner for the year 2010. This pageant is the first stage of the national level beauty competition called Miss Black USA. Miss Black Colorado is an annual event that is meant only for the young women of African American community, who are competent but do not get enough media attention.

The winner of Miss Black Colorado not only gets a good media focus to help them pursue a career in media and modeling, but it also provides scholarship to them so that they can pursue their further studies in their stream of interest for graduation, post graduation and other professional degrees. The African American young women consider it as a good platform to come into the focus. The contestants of this pageant are judged on the basis of their talent, aptitude, intellect and beauty.

Laurie Pierce, the winner of this year’s Miss Black Colorado, is a first year medical student of Meharry Medical College. She feels overwhelmed to be the brand new representative of the black women’s community in Colorado. The 23 year old student has been a cheer leader in her high school days and is a radio DJ and a modeler. She enjoys singing, pageant shows and socializing through various networks including the web. After the pageant, she used her title to collect funds for a children’s hospital and also collect Christmas gifts for the poor children. She is also promoting various other social causes. Miss Black Colorado 2010, Laurie Pierce, will participate in the next level of the competition called “Miss Black USA” in 2011. Here she would compete with all the states level winners, from all over USA.

LONDON - A Californian couple have been declared the world's tallest man and wife. Guinness Worl...

NYK teachers sacked for flirting on Facebook with students

NEW YORK - At least three teachers from public high schools in New York have been sacked in the ...