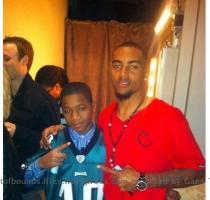 LOS ANGELES (GaeaTimes.com)- Nadin Khoury on Thursday night received the most pleasant surprise he could have ever imagined of in his life. The child had appeared on ABC’s show “The View” where he was discussing the unfortunate incident that struck him last month. Never had he been able to guess that the show would bring him face to face with his icon DeSean Jackson. Yes, while the kid with his family shared his traumatic experiences, the Philadelphia Eagles wide receiver approached from behind going on to give the kid the sweetest surprise of his life.

The child was bullied and beaten by a gang of seven on January 11 in Pennsylvania while he was returning from school. The child who had no one for company fell a victim to the mischief of the gang members who continued harassing the boy for a long stretch of thirty minutes. While they continued beating and bullying him, one of the gang members in an attempt to capture the fun recorded the whole incident on a video tape. It was this video tape that busted the story of Nadin Khoury making it an issue of national concern. As the child and his family members talked of the incident, Elizabeth Hasselbeck mentioned that the 13 year old kid was a big fan of the Philadelphia Eagles and considered DeSean Jackson to be his idol.

No sooner had she mentioned it when Nadin Khoury’s icon himself appeared on the sets of “The View” along with two other team mates guard Todd Herremans and center Jamaal Jackson . The child could hardly believe that DeSean Jackson was actually standing in front of him. While DeSean Jackson presented the kid with an Eagles No. 10 Jackson autographed jersey, Jamaal Jackson gave Nadir khoury a gift basket, Todd Herremans offered the child an Eagles tickets to a game for the next season.

LONDON - Bernd Ottovordemgentschenfelde is reportedly said to have got into Germany's reco...

WASHINGTON - It looks like males are more considerate than imagined - at least, in nematode worms. A...

Here's the art behind Nobel citations

LONDON - Singer Sarah Harding has said Girls Aloud will make album only when each member of the band...

LONDON - Singer Cheryl Cole confirms that the Girls Aloud group is set to come back together, as the...

LONDON - Girls Aloud singer Nadine Coyle has revealed that she doesn't like over-confident men and c...

NEW DELHI - If Indian sports lovers thought Monday was the finest day in athletics for the country ...

NEW DELHI - The following are the results on the ninth day of the competitions at the Commonwealth G...
Copyright© 2011 The Gaea Times