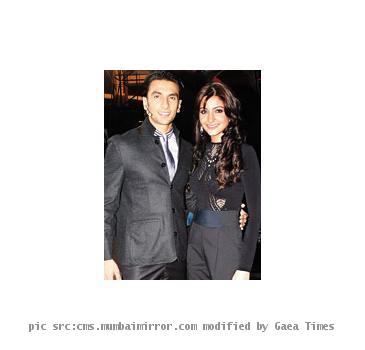 MUMBAI, INDIA (GaeaTimes.com)- After receiving considerably good reviews for his debut flick, ‘Band Baaja Baaraat’, rumors have been abuzz that actor Ranveer Singh and his lady love in the Yash Raj film, Anushka Sharma are dating each other. However, the former model is not the only woman from the world of glitz and glamor that the 25-year-old actor has been romantically involved with. If rumors mills are anything to go by then Ranveer Singh was supposedly seeing costume designer Gopika Malkan before he got his big break and made his debut in Bollywood under the prestigious Yash Raj Productions.

The actor is known to have dated Gopika Malkan for more than a year prior to his acting career although the pair continue to remain good friends even after calling it quits months back, an insider has revealed to the media. Meanwhile, the duo is known to have shared a rather awkward moment at the recently held Filmfare Awards which Ranveer Singh had, reportedly, attended with his current flame Anushka Sharma. According to sources, while the newcomer was sharing a cozy moment with his ‘Band Baaja Baaraat’ co-star, when all of a sudden he bumped into his ex-girlfriend Gopika Malkan who was also present at the award ceremony.

When contacted, Gopika Malkan denied being even present at the Filmfare Awards that was held on Saturday at the Yash Raj Studio and added that although Ranveer Singh is a ‘good friend,’ they have never been dating each other. While talking about the costume designer, the 25-year-old actor said that she was a good friend but refuted reports that he had met her at the award ceremony.

CHENNAI - The seven-year-old's fingers created magic on the tabla at the Commonwealth Games opening ...

After stealing CWG show, Keshav went back to bedtime story!

NEW DELHI - Sitting on the edge of his seat to reach the microphone, seven-year-old tabla prod...

September 2, 2010 (Sampurn Wire):Today is the day of our great, adorable and the naughtiest Lord K...

July 20, 2010 (Sampurn Wire): Screenwriters often do not get the recognition they deserve. All the...

Lakshmi Sharma the Malayalam actress is all set to make her comeback in a movie titled "Makaramanju"...

Three Indians into second round of Pune ITF

Swa Le, starring Dileep and Gopika, carried a lot of expectations. However, the film hasn’t do...

Mammootty wins Actor of the Decade