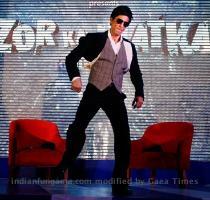 MUMBAI, INDIA (GaeaTimes.com)- The latest action on the Indian television begun last night with “Zor Ka Jhatka” kicking off with a bang. To add an all the more bang to the show, the producers decided to get it hosted by none other than the Bollywood badshah Shah Rukh Khan himself who rocked the first episode of the show that got aired last night on NDTV Imagine.

“Zor Ka Jhatka” is sure to gear up not only its participants but also the television viewers who will be amazed to see how the 28 celebrities battle out the game to win a whopping amount of Rs. 1.5 crores. The show is based on the American reality show “Wipe Out” and has promised its viewers to show case a total wipe out in the course of the 16 days where the contestants will be undergoing all sorts of grueling tasks. As days will pass by, the tasks will also get harder with the contestants having a real strenuous time in the rugged lands of the of Argentina. The first episode saw the star host giving live updates to the audience about the tasks that had already begun in the Argentinian soil.

It was actress Soumya Tandon who is in Argentina conducting the competition. Host Shahrukh Khan reminded the audience “Zor ka Jhatka” was all about power and money where one can only make it to the finals if he or she has a passion for money. The show, however, has an interesting format with none of its contestants getting eliminated out due to their poor performance. Instead they will be given chances for improvement. The first episode saw boxer Manoj Kumar grabbing Rs 10 lakhs by beating Kushal Punjabi and Bhaktiyar Irani.