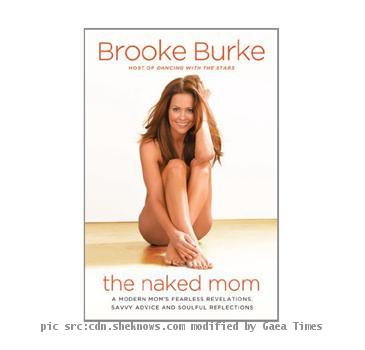 LOS ANGELES (GaeaTimes.com)- Model turned television personality Brooke Burke is presently busy promoting her book “The Naked Mom: A Modern Mom’s Fearless Revelations, Sawy Advice, and Soulful Reflections” which hit the book stores on Feb 2. During one of her recent interviews, the “Dancing with the Stars” host said that she wanted to name her book “Dancing through Chaos” as the book deals with her personal life, her career, her children and also how she found her own rhythm back in life by “gracefully” managing the chaos. The stunning host anticipates that most mothers would like her book and her effort.

Brooke Burke told a reputed media outlet that her new book is about “motherhood revealed” and also deals with some parts of her inner self which nobody has seen before. The mother of four children said that she is one of those mothers who is not ashamed to speak about the challenges that she faced and also share the difficult moments. Brooke Burke also added that her book deals with the things that she did in her life and also the things that she is still learning and in the end how she is raising a “blended family”. The former Playboy model said that balancing professional and personal life is not at all easy nut she enjoys every part of it.

Brooke Burke revealed that one of the “naked truths” of her life is she loves her children “madly” but does not always “like” them. In her book she stated that “The Naked Mom” is about motherhood and it is also about being wrong or right in its own sphere. In the end, she said that her book is about being “authentic”.

LONDON - Talk show host Tyra Banks and a number of top models will be donating their dresses to char...
Copyright© 2011 The Gaea Times