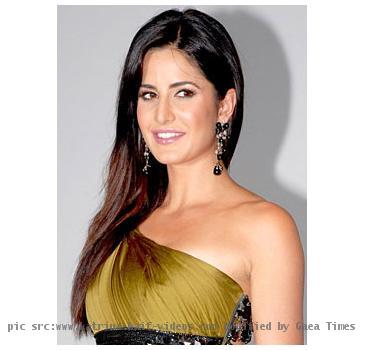 MUMBAI, INDIA (GaeaTimes.com)- After Priyanka Chopra and Shahid Kapoor, the latest pair about whom the whole B-town is talking about is none other than glam doll Katrina Kaif and Ranbir Kapoor. Yes, it has been reported that the two have been spotted at various places where it became evident that they are not much bothered about how the world takes it. To add icing on the cake, buzz has it that Ranbir Kapoor and Katrina Kaif even spent the night together just before the morning when Katrina Kaif’s house was raided by the Income Tax officials.

Katrina Kaif, however, has rubbished the rumors calling them baseless. She said that had the news been authentic then it would have hit the headlines immediately and not after ten days. According to sources, it was around 6 a.m in the morning of January 24 that the IT Department raided the actress’s house and reports claims that the Kapoor lad left her residence around 4 a.m after spending the night together. He had reportedly checked into her flat shortly after 10 p.m the night before after completing his work-out sessions in a gym nearby by Katrina Kaif’s house.

This incident however, is not the first one to have sparked. Earlier too there were reports where, sources said that both the actors have been devoting a lot of quality time for their new budding relationship. Not much ago, the duo left a party hosted by Karan Johar in their respective cars, but an eyewitness claims to have seen Katrina Kaif then heading towards Ranbir Kapoor’s house. Her car remained parked in his garage all through the night. Last weekend too, the two were caught partying hard. What remains next is the much awaited confirmation of the relationship by the two.