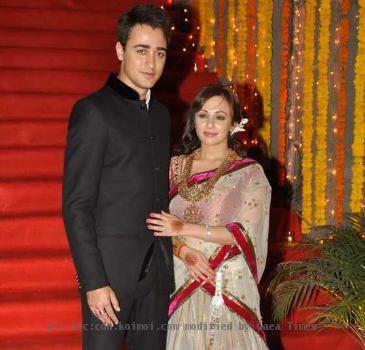 MUMBAI, INDIA (GaeaTimes.com)-Bollywood is excited about the upcoming wedding reception of handsome actor Imran Khan and his bride Avantika which will take place at Bandra’s Taj Land’s end. Taj Land’s End is a elite class hotel that has attracted a number of eminent celebrities of Bollywood and media persons to hold their family events in the elite suburb of Mumbai. Ever since the wedding of the actor and his longtime girlfriend was announced, actor Aamir Khan who is his uncle planned to throw a lavish wedding reception for the couple. The ‘3 Idiots’ actor and his director wife Kiran Rao has invited a lot of Bollywood bigwigs including top actors, producers, music directors, singers and media persons to the reception. The event will take place on February 5th 2011 as it has been announced.

Apart from the Bollywood veterans Aamir Khan has also invited some of the top businesspersons and politicians in his nephews wedding reception at Taj Land’s End. The card for invitation for the wedding reception goes “Aamir and Kiran would like the pleasure of your company over cocktails and dinner to celebrate the marriage of Imran and Avantika”. The spokesperson of actor Aamir Khan said it is going to be a grand affair. Kiran Rao is supervising the menu and decoration theme of the party. The release of Dhobi Ghat has enabled them to get some free time after long.

It has been reported that the Taj Land’s End will open an exclusive entrance for the reception. A lot of flowery decoration will be seen at the venue. The couple got married on Jan 10th this year.

CHANDIGARH - A local court here Monday issued summons to the managing director, director and chief b...

Scars in heart, Mumbai moves on with 26/11 memories

MUMBAI - Mumbai is two years past the day that deeply scarred its heart. The macabre dance of death ...

NEW DELHI - Maximum India - a festival of India - will be held in Washington in March next year, sho...
Copyright© 2011 The Gaea Times