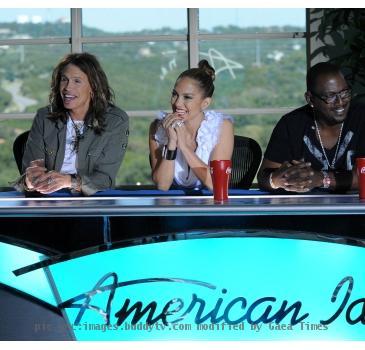 LOS ANGELES (GaeaTimes.com)- The Fox musical reality series “American Idol” is known to have hogged the spotlight in more occasions than one for the fair share of controversy that it is often associated with. Be it the diametrically opposite views of the judges or the oust of a favorite contestant, the hit singing competition is able to hit headlines with its every season. Last night’s episode of “American Idol” which is showcasing its tenth season currently yet again provided the viewers with the fodder to talk about the show after an apology was flashed at the beginning of the show saying that “American Idol would like to apologize for last week’s outrageous behavior by Steven Tyler.”

During an earlier episode of the musical reality show, the Aerosmith frontman had told a contestant named Jack Muck that his name sounds quite similar to a popular slang. Steven Tyler asked the boy, “You know what ‘Muck’ rhymes with?” and the boy guessed, ‘Muck?’ to which the singer replied, “Read my Lips…” However, since the card apology was aired at the beginning of Wednesday night’s episode of “American Idol“, the web is abuzz with reports that the apology was nothing but an attempt on the part of the Fox network officials to provide an impetus to the ratings of the show by creating a controversy.

Meanwhile, “American Idol” host Ryan Seacrest told listeners during the KIIS-FM radio show earlier on Wednesday that the apology was offered at the show executives felt the need to do so owing to the remarks made by judge Steven Tyler during a previous episode.