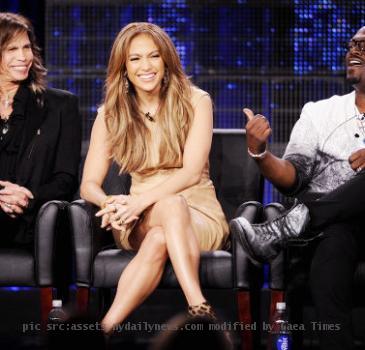 LOS ANGELES (GaeaTimes.com)- It was indeed a great time for the music lovers all over the globe. American Idol 2011 season 10 kicked off last night with its very first episode. People were literally glued to FOX channel from 8p.m onwards last night to catch up with the latest updates of the show. What actually made people stay tuned to the channel was the appearance of new judges on the show. No prize for guesses! Well, it was the gorgeous Jennifer Lopez and the Aerosmith front man Steven Tyler. The contestants were introduced in the very first episode as they came in one by one and gave their individual performances.

There were some real contenders and there were also some who just came to American Idol 2011 only for the sake of it. It could be called a show of contenders versus the pretenders. Kenzie Palmer was the youngest participant of the show who was just 15 years old. Her song impressed J-Lo, but failed to do the same to the other two judges. Devyn Rush, a 20-year-old bluesy singing waitress from Pennsylvania working in Times Square got subtly slammed by the judges because of her sense of dressing. Kosovo Melinda was another participant of the show, who sag the song titled “Ademi”. It was by far one of the best songs that was sung on the show. She had a great voice. Speaking of the pretenders, there was this participant by the name of Chris Cordeiro. He was a boy scout and was pathetic in his performance. Michael Perotto was as well HILARIOUSLY bad with the classic “Proud Mary”.

Last night episode of American Idol 2011 saw a number of ups and downs of the participants. Some were simply amazing, while the others were pathetically bad. Out of all of them, Yoji (Pop) Asano, 25, sang a different version of Miley Cyrus’ “Party in the U.S.A.” which was probably the highlight of last night’s show. Looks like this season of the show would have as high TRPs as its previous seasons had.

SYDNEY - Famous American TV series 'Buffy the Vampire Slayer' is set to be turned into a new Hol...
Copyright© 2011 The Gaea Times